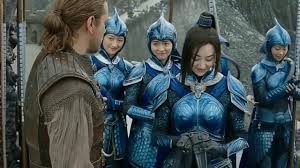 Mercenaries, William (Damon) and Pero (Pascal), on a quest for black powder in China during the 11th century are captured by a group of elite Chinese warriors. While imprisoned, they get wrapped up in their captors’ fight against a race of mythical creatures. One of China’s most expensive productions, I was surprised and disappointed to find the CGI especially bad. Of course, the plot is silly, the characters are thin, and the dialogue stilted, but I thought they could have at least stepped up on the visuals. It’s actually very bad all around, and I might even be going too easy on it, since, for some reason, it was still rather entertaining. However, with the level of talent involved in this picture (Zhang Yimou, Edward Zwick, Matt Damon for example), I can’t understand why it falls so flat. Yimou made a much better film about the Great Wall in 2002’s Hero.

Saddled with a crew of stranded army nurses, Lieutenant Commander Matt Sherman (Cary Grant) leads a group of sailors aboard the USS Sea Tiger during World War II. That includes new shipmate Lieutenant Nick Holden (Curtis), whose habits as a con artist prove useful in getting their ship to safety. Old Hollywood fantasy in a lot of ways (the army nurses are gorgeous, the officers handsome), but it’s also very knowing in other ways (the way the enlisted men react to the new officer for example). Plus, it’s a well-crafted, entertaining spectacle.

During World War II, these allied prisoners of war have escaped from every camp that they’ve been held captive in. So the Nazis build a special camp made just for them. Thought to be impossible to escape out of, the POWs plan a massive prison break, revealed in elaborate detail from the planning to the exciting execution. Thrilling adventure film with real stakes and a cast of some of the coolest men ever (McQueen, Garner, Bronson, Coburn), each given their chance to shine. The tunnel sequence when the lights go out on Charles Bronson is an all-time great suspense scene. And, of course, the score is iconic.

The Last Samurai is a complete fantasy. Silly wish fulfillment, cultural appropriation aside, I love this film. Tom Cruise, a traumatized, boozing veteran of the American Indian War, becomes a mercenary hired to train Japan’s Imperial Army. After a disastrous battle ends with him being taken hostage by a rebel band of samurai, he slowly grows to love and appreciate the samurai way of life. This formula has been recycled a number of times: The Last of the Mohicans, Dances With Wolves, Avatar, Pocahontas. I contend that this Tom Cruise vehicle is the best of them. It romanticizes everything well past realism, but as make-believe, it’s wonderful and finely crafted.

The lives of working-class buddies in a small Pennsylvania town are interrupted when three from the group head to Vietnam with the Army. There, Mike (the most serious of the group), Nick, and Steven are forced into a game of Russian Roulette that scars them well after they manage to escape. Mike might be De Niro’s best performance and most compelling character (and yes, I have seen Raging Bull). Walken and Streep with the two key supporting roles also stand out. My problems with the film have been noted by others, and mainly concern its lack of complexity. It wears its emotions on its sleeve. The other side, the Northern Vietnamese, are foreign and brutal. Rather than condemn this aspect as racist, I simply saw it as an extension of the film’s simple-mindedness. This being said, the three-hour long epic was engaging and moving. The crap-shoot chance involved in the Russian roulette sequences plus the acting makes for two memorably brutal and sad scenes. I also admired the odd three distinct act structure that makes the film feel epic and not drag. The scenes between De Niro and Streep are some of the best in the movie.

An American widow and her two children are kidnapped and held for ransom by a brigand named Raisuli (Connery) in early 20th century Morocco. President Teddy Roosevelt (Keith) gets involved in saving the widow, just as she begins to form some respect for her captor. Okay, so Sean Connery is playing a Muslim leader. Right away, that’s pretty ridiculous. The crazy thing is that, though he makes no discernible effort to be convincing as a Berber, he’s still pretty compelling in this role. My main problem with the film is that at 2 hours (so not a short film), it still felt like it wanted to be much longer. Splitting time between President Roosevelt and Raisuli with the American family didn’t allow enough time with either. I did love the old-fashioned spirit of the movie; soaring score, epic battle scenes, romanticized characters. Overall, it’s a good film, no more. 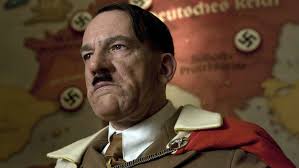 Unfolded in a lengthy episodic style, a renegade (or clandestine) group of Jewish soldiers led by Aldo “The Apache” Raine wreak havoc and vengeance on the Nazis during World War II. Meanwhile, pure evil masquerades as a mischievous rogue in the form of Colonel Hans Landa (played brilliantly by Waltz in a star-making turn). He’s coined the Jew hunter and makes it his mission to track the Basterds down. With only a handful of scenes, the film’s 2 and a half hour running time blows by. Each scene is a tour de force of verbal suspense and the finest example of Tarantino’s unique gift. A fantastic cast fills out even the bit parts making every character memorable; Til Schweiger as Hugo Stiglitz for example. At the end, when Pitt’s character says, “I think this might just be my masterpiece,” I feel that it applies to Tarantino and this incredible film he wrote and directed.

In the aftermath of World War I, a young German girl, Anna, mourns the loss of her fiancée, Frantz, when, one day, she notices a mysterious Frenchman visiting her beloved’s grave. “Who is he?” Anna wonders, as he begins spending time with her and Frantz’ family, and as she slowly begins to fall for him. At its core, the film is a fairly simple story, but it’s strengthened by themes of forgiveness, xenophobia, truth versus lies, and illicit romance. Plus, Ozon’s direction gives the film the suspense and tension of a classic Hitchcock. Switching between black/white and color, I believe to signify times of mourning versus post-war closure, Frantz is an excellent foreign drama, though I can’t shake my disappointment with the resolution, despite it probably being the right ending for the film. 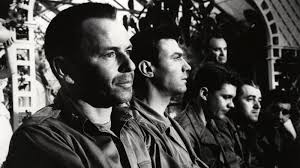 Political thriller about a group of soldiers returning to the States after a harrowing campaign in the Korea War. But Captain Marco (Sinatra) starts to doubt his own memories and understanding of what took place overseas, and all signs point to brainwashing. Soon Captain Marco finds a major Government conspiracy that involves turning soldiers into helpless killing machines, and Staff Sergeant Raymond Shaw (Harvey), son of Svengali-like Senator’s wife Eleanor Iselin (Lansbury), is at the heart of it. Communist paranoia at its finest, as well as a razor-sharp satire of the McCarthy era, this is such a fine film. Gripping, odd, suspenseful, layered. A masterpiece of its genre. 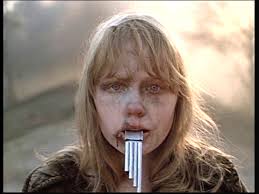 In Belarus, 1943, a young boy, Flyora, joins the local resistance movement and witnesses the atrocities perpetrated by the occupying Nazis. With such a potent subject, how could I call this film dull? Even with a dozen or so piercing images and an unforgettable sequence early on where Flyora and a new companion make their ways across nearly gelatinous mud, Come and See is monotonous. Like many well-respected foreign films, it has one tone and never wavers for a second from it. It’s like being pounded in the head relentlessly until you get used to it and bored by it. Its style has garnered it many admirers. I’m not one of them.