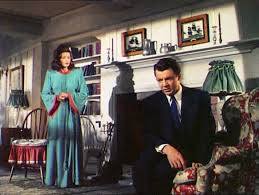 Novelist, Richard Harlan’s (Wilde) own story should be a cautionary tale. He fell in love after a brief flirtation with the beautiful Ellen Berent (Tierney), and they were married soon after. It’s only after they married that the dark side of her personality peaked through. Violently possessive, Ellen slowly destroys his life, and Harlan ends up in jail. The only problem with calling this a cautionary tale is that it’s hard to say what exactly Harlan’s mistakes were; at least, early on. There weren’t exactly any clear signs that Ellen was a psychopath. She was an enigma and that only made him more curious. I can’t blame him. Leave Her to Heaven is a brightly colored melodrama with an undercurrent of noir. Like its lead character, Ellen, the film’s dazzling superficial qualities belie its dark core. Tierney is unforgettable in her role; pristine, Barbie-doll looks, and an ice-cold manner. Her scene at the lake, shades on, staring off into the distance as something horrific happens right in front of her, is as chilling a scene as there ever was.