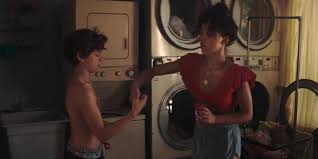 James: Yes. She’s filling your head full of fear, I pump you up full of strength. Cause we’re a team and I know you got what it takes. You’re a fucking star and I know it, that’s why I’m here. I’m your cheerleader Honey Boy.

Much is made about Shia LaBeouf’s first script, Honey Boy, as it feels like a revelation from his own life. Not having read the background to this film or any comments LaBeouf may have made about its authenticity, it feels presumptuous for me to guess how much of it is true (taken from the star’s life and written into film). I can say that it certainly feels true. That it’s perceptive and moving, and that it’s exceptionally well-acted, LaBeouf and Jupe especially. Jupe plays Honey Boy, a child star supporting his wildly erratic, often abusive father, James, played by LaBeouf. Har’el does an impressive job directing the story, flashing back in time seamlessly, making the narrative seem real. James is a man of many sides. We see all of his bad sides, but it’s the occasional sweeter scenes that make you think he could possibly change. Those scenes are usually followed by him tearing it all down again. Poignant, fascinating work.