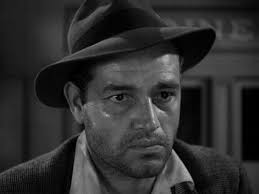 Al Roberts: That’s life. Whichever way you turn, Fate sticks out a foot to trip you.

Al Roberts (Neal) hitchhikes his way from New York to Hollywood, or, at least, that was the plan. He’s got a great girl waiting for him in L.A that he intends to marry. His plans, however, get derailed by bad luck and bad accidents the way you hear him tell it. Sitting alone, ragged, vagrant, in a Reno diner, Al tells us his side of things. How he played no part in the death of Charles Haskell Jr. (a shady philanthropist of sorts, who offers him a ride). How he became mixed up with Lucifer in female form, also known as Vera (Savage). How he didn’t want to go along with her schemes and how the conclusion of their partnership was just one more trick of Fate that he had little control over. He mentions that the cops would never believe his story. I don’t, but that’s just part of what makes Detour such a fine, compelling noir despite its noticeable limitations. It’s dark, it’s clever. It gives its inexperienced actors one note a piece to play and they play it to perfection. Perhaps no noir, known for its use of narration, used the device better than this one.