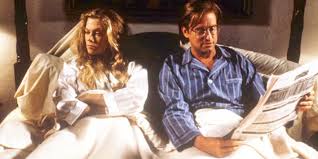 Oliver Rose: I think you owe me a solid reason. I worked my ass off for you and the kids to have a nice life and you owe me a reason that makes sense. I want to hear it.

Barbara Rose: Because. When I watch you eat. When I see you asleep. When I look at you lately, I just want to smash your face in.

There isn’t a clearly defined reason why the Roses’ marriage doesn’t work out after nearly twenty years together. True, Oliver (Douglas) works extremely hard, often at the expense of his family life. True, he doesn’t really listen very well, but look at it from his side. He’s worked extremely hard for his family; so that they can have that beautiful house, the fancy kitchenware, and the like. I empathized with both Barbara (Turner) and Oliver at separate times in the film, but, ultimately, none of it matters. Neither one is right and, by the end, their efforts to out-petty each other lead to the logical conclusion. Along the way, however, The War of the Roses is a very funny picture. Told at a fever pitch, we watch the Roses devolve slowly but surely until it goes from a few childish antics to seriously demented violence and destruction. DeVito, starring and directing, gives the movie a faux-cheeriness and a Looney Tunes level of mayhem. It also manages a few perceptive moments. I enjoy Throw Mama from a Train (DeVito’s film prior to this one) but felt it was let down by softening the material and not going all-in on the black humor. The War of the Roses threatens at a few points to go soft but thankfully never does. Kathleen Turner, though something more here, is one of film history’s greatest femme fatales. I’m not sure anyone does contempt better.