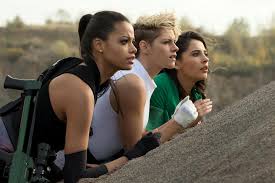 Sabina Wilson: [with a playful giggle] I think women can do anything.

Jonny Smith: Well, just because they can, doesn’t mean they should, right?

The “angels,” Sabina (Stewart), Elena (Scott), and Jane (Balinska)  take on a corporation covering up a newly invented energy device that has the power to be a world weapon. I don’t consider myself the target audience for “girl power,” and most attempts over the past few years at rectifying 80 years of “male gaze” have left me unmoved; mainly because they were ham-handed. This iteration of Charlie’s Angels is still ham-handed but slight too, and, in any case, it’s much better than the last 2 films led by Drew Barrymore. For one thing, this is a pretty solid action flick. The “angels” are likable, there’s a red herring or two to keep us invested and a certain knowingness about the humor that makes the film slightly more intelligent than goofy. This is not a great film by any means but watch Charlie’s Angels after reading the IMDB reviews and it will easily exceed your expectations.