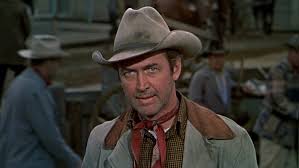 From the moment Jeff Webster (Stewart in one of his five collaborations with director, Anthony Mann) drives into Dawson City, Yukon, he’s indifference personified. Something must have happened in his past to make him like this, but, as far as I can clearly recall, it’s never clearly explained. He’s a hard man; the type the people of Dawson City desperately need, if he could only care enough to help them. It’s the close of the 19th century and Yukon is booming with gold. A corrupt judge, Judge Gannon (McIntire) with dozens of men on his payroll is moving in on claims hardworking miners have already staked. Anthony Mann and Stewart’s collaborations are referred to as psychological westerns. The designation fits but it almost spoils how deceptively simple they are. The setup in all five films are a dime a dozen. Here, a jaded antihero doesn’t want to get involved but has his hand forced. You, no doubt, have seen a film or two like that before. I think the key is that this setup is infinitely satisfying. As long as you keep refreshing it with new characters and a fresh take, it can always be effective. Anthony Mann, as far as I can see, really introduced the antihero to the mainstream westerns. Classic westerns tend to revolve around irreproachable male figures. John Wayne and Henry Fonda were saints in a large portion of their westerns. We are definitely rooting for Stewart in The Far Country but we’re rooting for him to finally do the right thing as much as we are for him to fight. Judge Gannon makes for a truly despicable villain and it all builds to an immensely satisfying finale. Preeminent character actor, Walter Brennan, plays Jeff’s partner, Ben.