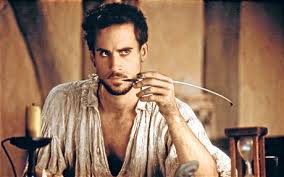 Viola De Lesseps: This is not life, Will. It is a stolen season.

What to do with this film? I can’t agree with what seems to be the majority’s consensus; I don’t consider Shakespeare in Love a great film. That’s forgivable, and it’s not because of the Best Picture Oscar that I say that, but I don’t even consider Shakespeare in Love a superior romantic comedy. It follows the famous playwright early in his career, played by Joseph Fiennes, toiling in obscurity and struggling for inspiration until he meets the beautiful Viola (Paltrow). A romance ensues and motivates him to write Romeo and Juliet.  There’s a lot more involved and most of it is very interesting. I enjoyed the period detail, the backstage antics, and much of the humor. I enjoyed Judi Dench’s portrayal of Elizabeth I, and the supporting cast, in general, is fantastic. I’m less enthusiastic about what might be considered the heart of the film; the romance. I don’t wish to pile on Paltrow or Fiennes, who strike me as easy targets (Fiennes especially), and I don’t say that they are bad, but I’m mostly indifferent to their characters and their relationship. It’s superficial and dull.