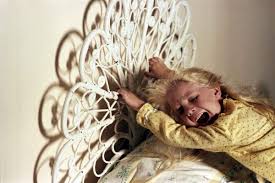 The idea of a family-friendly horror film isn’t too compelling but Poltergeist manages to bypass the gore and the deaths of a typical horror flick with an abundance of creativity, effective (still) special-effects, and overall spectacle. It’s a freak show. A well-paced ride through terrible sights and sounds. Your rare expensive horror film that works. The Freeling family, led by Steve (Nelson) and Diane (Williams), discover their picturesque, suburban home was built on top of a gravesite and is now under attack by supernatural forces. They reach out for help from parapsychologist, Dr. Lesh (Straight), and her team, then later, a medium, Tangina (Rubinstein), but ultimately, it’s up to the parents to save their family (two daughters and a son). Spielberg is billed as a producer but there’s a lot of evidence that he directed Poltergeist. In any case, he played a huge role creatively and his strengths show through-directing children, pacing the action, building suspense. Poltergeist is a bloodless affair, too tame to do much damage to me nowadays, but as an attraction of sorts, it’s as fun as they come.