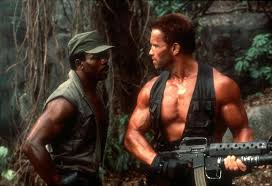 Dutch: If it bleeds, we can kill it.

Perhaps the manliest movie ever produced, Predator teams Arnold Schwarzenegger with Apollo Creed, or Carl Weathers, if you prefer, and a bunch of other buff guys thrown into the Central American jungle. Arnold leads a band of mercenaries sent to rescue an official but instead discover the ultimate killer/predator, an alien who crash-landed on Earth and seems to spend his time hunting other predators. Critics complained about the alien’s unclearly defined motivation. I disagree. Very few films have such a firm grasp on what they’re trying to be and accomplish that ambition so efficiently. Motivation is superfluous here. What we want is Arnold versus alien and we get it. We also get a handful of cool characters, Mac (Duke) being my favorite, and a great location for an action film. Predator is a contender for the best action flick of that decade.