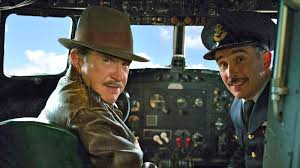 Frank Forbes: [to Marla] You’re an exception. Rules don’t apply to you.

Howard Hughes. The man, the myth. Only I’ve never really understood the fascination with him. Perhaps it’s obvious to some: he was obscenely wealthy, an influential Hollywood figure, an aviator, and dated some of the most desirable women of his time. Yet, I have never been that interested in him or his story and no film has come along to make me feel otherwise (haven’t seen Melvin and Howard). The most recent attempt is Warren Beatty’s Rules Don’t Apply. Opening in the late ’50s, a young driver, Frank (Ehrenreich), gets a job chauffeuring a young Hollywood hopeful, Marla (Collins), around L.A. The two begin to fall for one another and the film is off to a great start. It’s when the main star of the piece, Howard Hughes (Beatty), shows up that the film loses its way. Shifting tones should feel like a journey not like a distraction. There are two stories at play here and though they are linked, they don’t compliment each other. One subtracts from the other. The result turns Hughes into a creepy older guy who interrupts an intriguing romance.