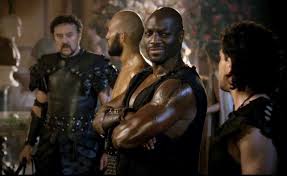 Cassia: Is this the end of the world? Why would the gods let this happen?

Entertainment is something I value in nearly all contexts, so I do give Pompeii some credit for being entertaining despite not being much of anything else. Directed by Paul W.S Anderson, the king of garbage entertainment (though Michael Bay might argue that distinction), Pompeii follows orphaned slave, Milo (Harrington), as he’s taken to the famed Roman city to compete in gladiatorial matches where he meets fellow slave Atticus (Akinnuoye-Agbaje), and later, Cassia (Browning), the instant love of his life (rolling my eyes). This is an awfully silly film heavily indebted to much better ones, chiefly Gladiator and Titanic. There’s plenty to enjoy for those like me who appreciate camp and crude craftsmanship but almost nothing to admire.