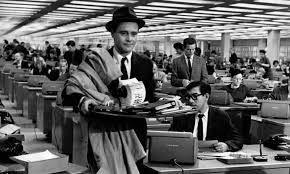 Fran Kubelik: When you’re in love with a married man, you shouldn’t wear mascara.

C.C Baxter (Lemmon) is an enabler. His philandering bosses walk all over him and his apartment, using it whenever they can get away from their wives to be with their mistresses. Fran Kubelik (MacLaine), Baxter’s office crush, isn’t doing much better. She turns out to be one of these mistresses, in love with the head honcho, Mr. J.D Sheldrake (MacMurray). A particularly low night for both of them results in the two spending the weekend together in Baxter’s apartment, helping each other. This film is a masterful balancing act between tones for director, Billy Wilder. Elevated beyond its sordid subject matter, The Apartment is sad (I love the image of Baxter completely alone in his enormous office space surrounded by empty desks or sitting by himself on a long New York bench) and sweet (I love the final exchange between Baxter and Ms. Kubelik) in equal measure and like its protagonist, hopeful. Even when he is cleaning up after someone else’s’ party early on in the film, he’s humming cheerfully. There’s a lightness to the humor in this movie that would seem inappropriate if not for how deftly Wilder and his actors manage it. Certainly, one of my favorite films.