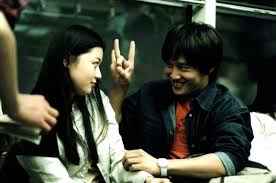 It’s rare and largely unnecessary for a romantic comedy to feature any measure of originality. Most people look to the genre for easy laughs, cute faces, and a reassuring story. My Sassy Girl is now nearly twenty years old, but I’m struck by how fresh it feels. The setup is familiar enough. On the subway one evening, a young man, Gyeon-woo (Cha), meets a very drunk girl, simply referred to as The Girl in credits, played by Jun Ji-hyun. She throws up, he’s burdened with seeing her home, and later, through a serious misunderstanding, Gyeon-woo is tossed in prison. So begins their relationship and it’s a strange one, chiefly because she’s a bizarre girl; demanding, moody, reckless. Gyeon-woo can’t help himself from falling for her, and it’s a credit to the actress that we fully understand. Mean girlfriends aren’t anybody’s idea of a romantic lead but Jun and the quirky writing make The Girl a slow charmer. My Sassy Girl relies heavily on misunderstandings; for its humor and its story. That’s generally considered a weakness in movie storytelling but it works here and the final misunderstanding leads to a surprising and satisfying finale.