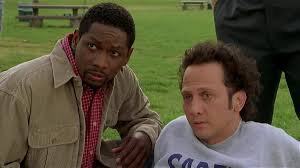 Rianna: I just want to thank everyone who sent me food and letters of support, especially the mentally handicapped child who sent me this sweet book of poems.

Marvin Mange: She read my poems.

Rob Schneider gets plugged into the Adam Sandler formula for comedy: a kind goofball protagonist learns how to stand up against the jerks in his life. As dumb and as poor as some of the Adam Sandler films are, I’m basically a fan. He also has plenty of movies that I consider good comedies (not to mention his impressive dramatic turns). I get the feeling that he turned this role down before it fell to Schneider who is convincing enough as the kind, put-upon hero but never delivers any laughs with this broad comedy’s ludicrous premise. He plays Marvin Mange, a police-hopeful, who gets badly hurt in a car accident and is put back together by a mad scientist who endows him with animal parts. The animal parts make him a natural as a police officer but eventually begin to run rampant, just as he’s getting close with a beautiful animal lover, Rianna (Haskell). There’s some promise with this material. I think perhaps with Jim Carrey, although it’s probably too close to Ace Ventura for him to ever be interested. As it is, The Animal is a brief ordeal, at times watchable, amusing, bizarre, unfunny, but always completely moronic.