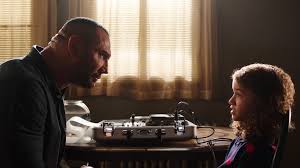 JJ (Bautista) is former special forces turned CIA, but after a botched job, his boss, David Kim (Jeong), gives him the lowly surveillance assignment of watching a single mother and her daughter, Sophie (Coleman), since they’re connected to a big-time international arms dealer. Sophie finds out about his little operation and blackmails him into spending time with her. It’s a pretty well-worn formula and I was surprised to see it used for a film made more for adults (this isn’t the kids’ film I expected, going in). Bautista is the antithesis of what a spy should be; inconspicuous, versatile, patient, average. He’s a massive man who stands out like a sore thumb. The film doesn’t make any effort to show him as a capable spy either. He’s pretty bad all the way through to the end. There’s a difference between an action hero and a spy but this film disregards that distinction. That being said, My Spy is actually quite enjoyable. Despite no big laughs and its typical premise, My Spy has a lot of likable faces, chiefly the young girl, Chloe Coleman, playing Sophie, and is much more pleasant than I anticipated.