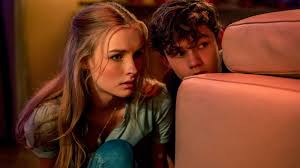 It’s Christmastime, and a popular girl, Ashley (Dejonge), watches over two boys, Luke (Miller) and Garrett (Oxenbould). in what was supposed to be a boring night at home. There’s not much to say about this film without including spoilers, so don’t read on if you’d like to see the film fresh. The two boys decide to spice things up. We’re programmed through decades of teen comedies to cheer for the nerds in film. Better Watch Out throws our empathy back in our face as we watch two teenage boys torture their babysitter for not paying any attention to them. The performances of the young actors are excellent, and the film genuinely disturbs; an effective if modest horror flick.