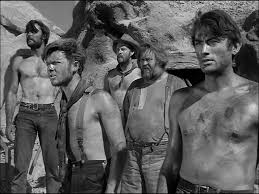 “Hell is empty
And all the devils are here.”-The Tempest

As far as I’m concerned, uncouth as I am, William Shakespeare’s greatest contribution was to film; the inspiration he gave to so many different movie scripts. Yellow Sky, a very fine, surprisingly brutal western starring Gregory Peck and Richard Widmark, springs from Shakespeare’s The Tempest. Peck leads a band of thieves across a scorching desert until they finally reach an apparently abandoned old western town. There, they meet an old prospector who goes by “Grandpa” and his beautiful granddaughter who goes by “Mike” (Baxter). The thieves are smart enough to see that the two are holding out on  something; probably gold. Peck and his gang stick around and, in the meantime, jostle around for attention from Mike. Much rougher than most westerns from this era, even Peck is less lovable hero than forgivable rogue.