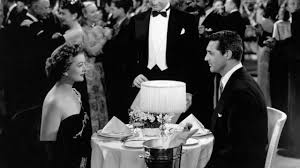 Margaret: I’ve never been subjected to so much charm before.

Cary Grant is a local artist named Richard Nugent with a reputation for being a womanizer. Judge Margaret Turner (Loy) knows all about his reputation. She meets him in court one afternoon after a fight breaks out between two women arguing over him. Still, she can’t help falling for him even while trying to get her younger, teenaged sister, Susan (Temple), to snap out of her infatuation for the man. The entire premise is ludicrous, even for a screwball comedy, but all that’s really needed is a contrivance to get these three stars together and it does the job. I do wish Grant and Loy had more time together on screen as they’re usually only together when surrounded by other characters.

One thought on “The Bachelor and the Bobby Soxer (1947, Directed by Irving Reis) English 6”