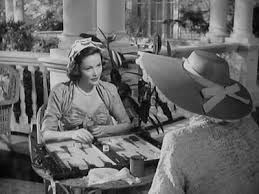 Ellen McNulty: [to Val, the newlywed] This is your mating season, you’re entitled to be alone.

Who wants their mother to stay with them during their honeymoon? Loving, loyal son, Val McNulty (Lund) does after finding out that his mother, Ellen (Ritter), lost her restaurant and has no place to stay. He asks her to move in with him and his new wife, Maggie (Tierney), though the two have only recently married and are still setting up in their apartment for a life together. Ellen accepts only after a series of misunderstandings leads Maggie to offer her a job as the maid, not knowing that she was talking to her new mother-in-law.  Soon enough, Maggie’s mother, Fran (Hopkins), moves in too, and chaos reigns. Quick, clever late-screwball comedy with a rare starring role for the magnificent Thelma Ritter. As tough and acerbic as her persona is, she’s never been anything less than endearing. Tierney’s character strikes me as overly difficult at times during this movie but it all works out in the end, of course.