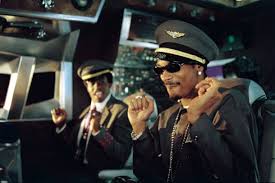 Nashawn Wade (Hart) wins a $100,000,000 in a court settlement after being on the wrong end of an airline’s carelessness. He uses his earnings to start his own airline, one with purple planes, complimentary fried chicken, strippers as stewardesses, and Snoop Dogg as a pilot. If this sounds amusing to you, I’ll admit, as ridiculous as it all is, it had a chance to be the black version of Airplane (1980), which is what it so clearly wants. Airplane, now 40 years old and dated in my opinion, is still funnier than Soul Plane. There are a lot of funny people in Soul Plane and I respect the energy they bring to the project but a film like this needs to be hilarious to warrant the level of silliness and, I repeat, Soul Plane simply isn’t funny. There’s no point in being offended by it, even though there are many opportunities; Monique, as TSA security, takes handsome fliers back to Airport detention and forces them to undress, for example. Like every joke in this picture, I’m just shaking my head saying, “wow.”