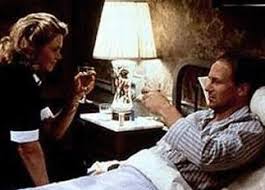 Macon: It’s wrong to think we could plan everything, as though it were a business trip. I don’t believe that anymore. Things just happen.

Macon Leary (Hurt) writes guides for businessmen who want to feel like they never left home when they travel abroad; how to have the most American experience possible in whatever country. He’s still churning out these guides dutifully though his young son has died and his wife, Sarah (Turner), has left in the painful aftermath. Macon seems emotionally dead. He drops his dog off before a trip at a local animal hospital and meets Muriel Pritchett (Davis), eccentric perhaps and certainly forward but mostly charming. She slowly brings Macon back to life. The Accidental Tourist is a wonderful film, adapted from a wonderful book, with a lot of sadness that miraculously manages to somehow still feel light. Hurt gives a very sharply observed performance and Davis is all warmth. I didn’t know while watching the film but I’ve found out since, that the beautiful score is the work of John Williams. That’s not surprising. He adds so much to the film and the ending is so satisfying.

One thought on “The Accidental Tourist (1988, Directed by Lawrence Kasdan) English 8”