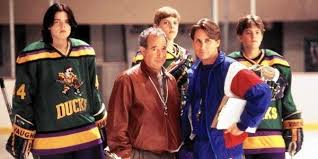 Gordon Bombay’s (Estevez) playing career is officially over. As he looks on to the next chapter of his life, he receives the offer of a lifetime to coach Team USA in the Junior Goodwill Games. Bringing back his players from the first Mighty Ducks and mixing in an assortment of new ones, he’ll have to get them playing together if they’re going to have a shot at beating Team Iceland. There was a time when I viewed this as the greatest movie ever made, the apex of the mighty Mighty Ducks trilogy. It’s impossible for me to detach myself completely from those memories and see the film objectively, nor do I really want to. It’s a nostalgic goldmine. There are memorable characters, imposing villains, and plenty of goofy antics to go along with the sports action. Maybe don’t watch this for the first time if you’re over twenty.