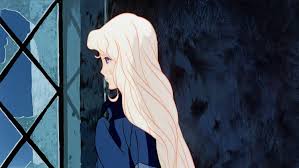 This film is nonsense. Imagine my surprise then to find that it was actually well-received and, to this day, highly regarded according to IMDB. It follows a unicorn (Farrow) who learns that she’s the last of her kind but, still optimistic, sets out to potentially find more just like her. Along the way, she gets help from a bumbling wizard named Schmendrick (Arkin) and a random woman named Molly (Grimes). Eventually, she’s turned into a human, becoming Lady Amalthea, and falls in love with a Prince. There aren’t many animated films that I don’t enjoy at all and this film has such a strong pedigree. The filmmakers, Bass and Rankin, made so many classic Christmas shorts. The voice cast is excellent and yet, this movie is dull, strange but not interestingly so, and baffling in how it moves from one plot point to another. I actually did like the music, with the dumbest lyrics the great Jimmy Webb ever wrote, performed by America, but they certainly didn’t take away from the bizarreness of the picture.