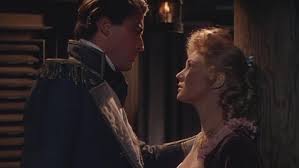 C.S Forrester’s famous literary hero, Horatio Hornblower, is adapted for the big screen, played by Gregory Peck with his natural austerity. English Naval Captain Horatio Hornblower guides his ship through every possible hardship during the Napoleonic Wars of the 19th century. Along the way, although married, he falls hard for Lady Barbara (Mayo). Compared to the jolly romps of Errol Flynn, this film seemed to me, overly serious. Well-crafted, well-acted, Captain Horatio Hornblower simply wasn’t much fun. Perhaps it’s an issue of expectations. This isn’t a swashbuckler. It’s a romantic drama set on a ship. Many people would welcome that. I didn’t care.