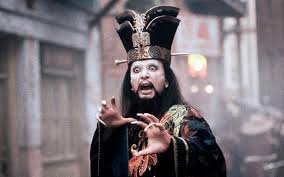 Jack Burton’s (Russell) just a truck driver looking to collect on the money his friend, Wang Chi (Dun), owes him. Led into San Francisco’s famed Chinatown, Burton’s tossed in the middle of a plot formed by an evil ghost, Lo Pan (Hong), to marry a green-eyed girl and break an ancient curse put upon him. Is this cultural appropriation? I’d argue that it makes fun of the white savior trope more than anything. Russell obviously looks the part- cool, tough, handsome-but often in this film, he has no idea what he is doing and its the supporting Asian cast that are in control. Much of Carpenter’s bizarre humor comes from the idea of this white guy trying to take control of the situation. The story is chaotic and not overly serious. It’s best to appreciate the various parts (the humor, the effects, the setting) and follow Carpenter down whatever weird path he wants to take.