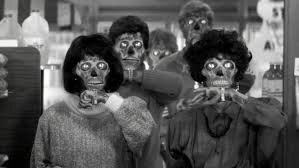 “They live. We sleep.” John Carpenter’s satire imagines a world where aliens disguised as humans represent the elite, upper class, controlling the media and enslaving people’s thoughts through subliminal messages. Famed wrestler Rowdy Roddy Piper is a limited actor but a likable, working-class hero playing a drifter named George. George stumbles upon a pair of glasses that see through the aliens’ artificial walls and reveal the truth (conveyed in black and white with vintage special effects). But people are so comfortable in their sleepwalking, mass-controlled lives, it seems impossible for George to convince anyone of what’s going on. They Live is prime satire mixed in with ’50s sci-fi storytelling. It’s smart, funny, as relevant as ever, and creative as hell. Its theme would be expanded years later in the Wachowski siblings’ classic The Matrix.