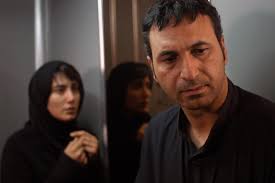 “Human beings are condemned to consequences.” Some wise old British writer once said that, though I’m struggling to place who. I, perhaps erroneously, remember reading it in some Graham Greene novel many years ago (The Heart of the Matter), but maybe it was Aldous Huxley as someone else has suggested to me. In any case, the quote perfectly underlines what’s at the heart of each film by the great, two-time Oscar winner, writer-director, Asghar Farhadi, a master in his prime. He found international acclaim and came to my attention back in 2011 with his powerful fifth feature film, A Separation, which won that year’s prize for Best Foreign-Language Film at the Academy Awards. He went on to win a second Oscar in that same category years later for The Salesman, and, as his reputation grew, some of his earlier works were made available to us in the Western world. One of these early films is Fireworks Wednesday. Young bride-to-be, Rouhi (Alidoosti), takes on short-term work helping the wealthy, dysfunctional Samiei family. The wife, Mozhdeh (Tehrani), is almost certain, let’s say ninety-nine percent sure, that her husband is cheating on her, and it’s that one percent doubt that is wearing on her. He makes her think that she’s crazy. Maybe she is. Like his other films, Farhadi’s Fireworks Wednesday focuses on the collateral damage, the innocent victims of domestic strife. In this film, it’s Rouhi, who’s like a third wheel in a toxic relationship, and it’s the Samiei’s young son. This is an involving drama and a potent one.