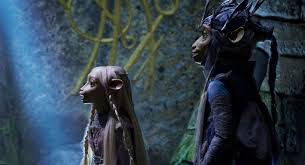 The legendary puppeteer, Jim Henson, was a true visionary. Getting close to forty years ago, he devised a serious film, a dark fantasy, told entirely with characters rendered by puppetry. The result, The Dark Crystal, is infamous as one of the creepiest movies ever made; certainly among the creepiest kids’ movies. This brand new prequel series takes seriously his vision but also expands the works and updates the technology. It’s as breathtakingly beautiful as it is grotesque. The world of Thra is held captive by the evil, sadistic Skeksis, led by the tyrant Emperor (Isaacs). A castle guard named Rian (Edgerton, a gelfling-which is the oppressed species that makes up the majority of Thra’s population-witnesses something that he wasn’t supposed to and from then on, he becomes a danger to the Skeksis dominant way of life. Now a fugitive, he teams up with Princess Brea (Taylor-Joy) and Deet (Emmanuel) to expose the Skeksis’ plans.  This show sacrifices none of the original film’s creepiness. It’s over-the-top gross, violent, dark, and ultimately deeply absorbing. It’s even superior to the film in storytelling.