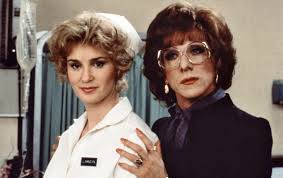 Dustin Hoffman cross-dresses. I think in 2020, the idea of a male star dressing up as a woman has lost much of its taboo or risqué appeal. Thankfully, Tootsie is better than that. While still being very much of its time, it isn’t what I would call dated. Hoffman is a New York actor, Michael Dorsey, desperate for work but not desperate enough to stop giving the directors who do hire him a rough time. His agent, George (Pollack, also the director of the film), in one of the film’s funniest scenes, tells him straight out, “no one’s going to hire you.” Needing to raise money to fund a play his buddy wrote, Hoffman creates Dorothy Michaels, a tough-minded, intelligent actress who lands a spot on a day-time soap called Southwest General. Michael finds out that actresses have to put up with a lot more than actors. Still very relevant, obviously, and handled humorously but effectively as well. Hoffman is a convincing, if unattractive woman and that’s crucial to why the film works. I was less impressed by the popular theme song or any of the music thrown in. That part of Tootsie is dated to me.