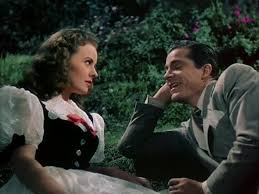 A small piece of Americana set to the music of Rodgers and Hammerstein obviously has its appeal. State Fair follows the kindly Frake family as they prepare for the annual Iowa State Fair. The patriarch, Abel (Winninger), makes a wager with a neighbor that his prize pig will take top prize. His wife, “Ma” (Bainter), competes in the pickle and mincemeat competition. Their son, Wayne (Haymes), falls in love with a singer that seems to be giving him the runaround, and their daughter, Margy (Crain), has love problems of her own with a slick reporter named Pat (Andrews). It’s slice-of-life meets Hollywood fairy tale and as such, it’s suitably corny. That doesn’t bother me so much. I did feel, however, that State Fair is sweet but unspectacular.