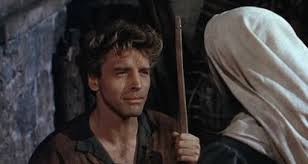 Dardo Bartoli (Lancaster) is a bit of a wild-card. Living in 12th century Italy with his young son, Dardo comes and goes as he pleases, spending the majority of his time hunting in the woods, away from the Hessians’ oppressive rule. While many of the local townspeople prepare to fight back, Dardo remains apathetic, even after his wife leaves him for the Hessians’ leader, Count Ulrich (Allenby). It’s not until Ulrich abducts Dardo ‘s son that he decides to revolt, quickly becoming the movement’s leader. An interesting premise unfulfilled due to what I feel are nondescript characters. Count Ulrich has the opportunity to be an especially vile villain but instead just lies flat for the majority of the story. The one colorful character is the Marchese Allesandro, but his decision to switch teams leaves a bitter taste in the end, and Lancaster isn’t given much to do but play the beefcake.