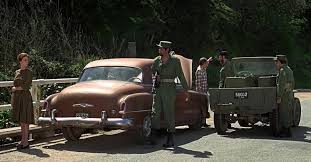 Considered by some to be Hitchcock’s worst film, Topaz sees the master of suspense once again tackle the arena of international espionage. A high-ranking Soviet agent, Boris Kusenov, defects and, in return for American asylum, exchanges valuable information about Soviet plans in Cuba. Needing to substantiate Kusenov’s claims, the CIA enlists the help of a French agent, André Devereaux (Stafford), to dig up some hard evidence. From there, Topaz becomes a rare ensemble piece in Hitchcock’s filmography. He’s a director who usually depends a lot on stars, but here, we get several points of view and it’s a good thing because the lead, Frederick Stafford, is the least interesting character on screen. Thankfully, the supporting cast is exceptional, and even the least of Hitchcock’s works offer one or two brilliant scenes (the death of a beautiful woman in a flowing purple dress for one or the entire Harlem sequence focusing on Roscoe Lee Brown’s character for another). I actually felt that the majority of this film was compelling and suspenseful stuff, far more brutal than the director’s other espionage output. Unfortunately, the ending is weak and unmemorable, although I should note, I saw the theatrical version and apparently, a longer version exists with an alternate ending.