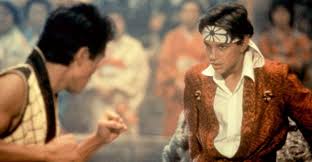 When you see a film you love, you may have the feeling that you want to find something else just like it. Studios cash in on this feeling, leading to a lot of unnecessary sequels (or even worse rip-offs), but usually, what we actually want is to be surprised and blown away again. I love The Karate Kid. Daniel LaRusso (Macchio) and Mr. Miyagi (Morita) are iconic characters but they only needed one film. They went on for three together, and, for Mr. Miyagi, four films total. Each subsequent film got worse and worse (more over-the-top and unnecessary with each sequel). Part II sees the pair traveling to Mr. Miyagi’s home in Okinawa, where a decades-old feud with a former friend, Sato, resurfaces. Part II is, to me, very watchable. I like it actually. The returning heroes and their corny romances are very enjoyable to me, but can I call it a good film? I don’t think so. It meanders in the back end and the conclusion is far less satisfying than its predecessor. Mainly, because the villain, Chozen, is psychotic and unbelievable.