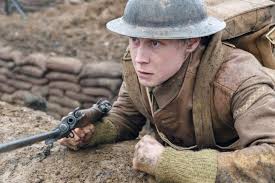 In April of 1917, with World War I waging, two young British soldiers, Schofield and Blake, race through no man’s land to deliver a message and stop an entire regiment from walking into a German trap. A lot that’s being made of this film surrounds its ambitious long-take approach. There appear to be only two takes across the entire story (whether there were added cuts done by careful framing and editing, I don’t know and is honestly unimportant). The illusion of two takes is impressive and so seamlessly done that 1917 could certainly be enjoyed purely as a technical exercise. I, however, believe that the style does serve the story, an exciting and moving story, and isn’t distracting. The long takes of two men simply walking a great distance can lull you a bit just before some harrowing assault strikes out of nowhere.