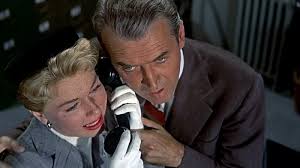 Hitchcock reworked the “ordinary man thrust into action” theme throughout his career. This particular film, The Man Who Knew Too Much, is, in fact, a remake of a picture he made twenty years prior with Peter Lorre. This time around, he uses major Hollywood stars in James Stewart and Doris Day. They play an old married couple, Ben and Jo McKenna, who travel to Morocco with their school-aged son. A seemingly random encounter with a Frenchman named Louis Bernard puts them right in the middle of an assassination plot and, making matters worse, their son is kidnapped. Typically grand entertainment by the great Hitchcock, The Man Who Knew Too Much does suffer slightly from being better in its first half (there’s a really effective misdirection in its opening act to follow its intriguing setup) than in its second half, but that doesn’t take away from its charms. The performances are excellent, including Doris Day, whom I’m a fan of, but stood the risk of being distracting in a genre we’re not used to seeing her in. Most of Hitchcock’s films along these lines feature a male protagonist boosted into the espionage world. This film offers an interesting twist in that you have a married couple both thrown in, and Hitchcock lets us know from the start that they’re not great with new situations (Stewart’s character very awkwardly does his best with local customs in a Morrocan restaurant). This makes their later ingenuity and success more appealing.