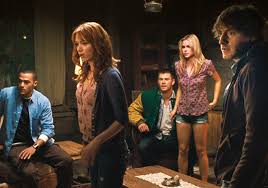 I like the “stupid teenagers in the woods” horror films, but we know their ins and outs by heart at this point. The Cabin in the Woods sacrifices a little in the gratification department in order to make it all seem fresh again. Yes, the fundamentals are still present. A group of five friends huddles together in some godforsaken cabin in the middle of nowhere. Something horrific comes there way, and…that’s all I’ll say because what works best about this film needs the element of surprise. It pulls the rug out from underneath our expectations. It’s for that same reason that I consider it more interesting to think about or discuss than to watch. Besides being unpolished, it’s designed to disappoint and it does. Others find its cleverness enough to make it a classic. I simply don’t. I also think it owes something to the superior Funny Games films by Michael Haneke.