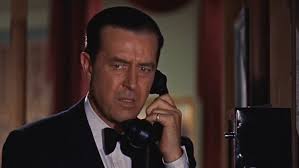 Hitchcock made so many films-all of them good in my book-a large percentage of them classic. The very best films he made, I’ve seen a few dozen times, so sometimes watching his lesser pictures (and I include Dial M for Murder among these), which are still very good, can be a more exciting experience. This is only my second time seeing Dial M for Murder after first watching it many years ago. It felt fresh. Based on a stage play, it follows a husband, Tony Wendice (Milland), plotting the perfect murder to get rid of his wealthy, cheating wife, Margot (Kelly). Unfolding very neatly from the plan to the execution to the aftermath, Dial M for Murder takes place almost entirely in one room. Hitchcock is masterful in how he constantly but unobtrusively moves the camera and also keeps his actors moving during conversation. It should be the yardstick for how to take something inherently theatrical and make it cinematic. I will say that some of my old disappointment from years ago came flooding back in the film’s final act. I found myself deeply invested in the husband’s schemes and, rather perversely, wanted him to get away with it. While the Chief Inspector character is well-drawn, his methods are unsporting at every turn and I’d have to say illegal. As a result, his inevitable triumph is less than satisfactory to me.