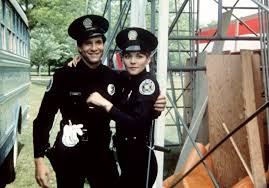 Steve Guttenberg makes a likable hero. He plays Carey Mahoney, an incorrigible trouble maker who’s been given an ultimatum by a police captain who cares about him: go through police academy or spend time in jail. A new policy by the city’s mayor allows anyone to apply for the police academy so, once there, Mahoney finds a large collection of oddballs trying to make it. There’s Moses (Smith), the seemingly mute giant, Karen (Cattrall), a bored rich girl, and Larvell (Winslow), the human sound effects machine, among others. Meanwhile, the instructor, Lt. Harris, does everything he can to make the new recruits quit. Buried beneath its juvenile sense of humor and obligatory nudity, there are actually some pretty positive things going on in Police Academy. For one thing, there are several prominent black characters, not just one, which, even today seems fresh for a comedy with a white lead. It’s an enjoyable film and even memorable without being exceptionally funny.