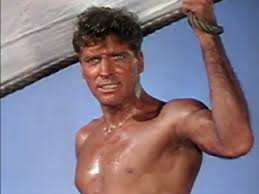 Captain Vallo (Lancaster) leads his ship and his crew through the waters of the Caribbean late in the 18th century. He agrees to capture and turn in a man calling himself El Libre, an enemy of the British Empire. Instead, he meets and falls in love with El Libre’s daughter, Consuelo (Bartok), then decides to help their cause. According to Christopher Lee who plays a small part in this swashbuckler, The Crimson Pirate started out as a more serious pirate film. Its director, Robert Siodmak, changed that and what resulted is a light, fast-paced adventure anchored by a charismatic performance by Burt Lancaster. I’m more familiar with Lancaster in heavyweight dramatic fare, so seeing him swinging through the impressively elaborate sets and playing the rogue is a welcome surprise. Though lightning-fast paced and non-stop action, The Crimson Pirate did take a while for me to invest in. Eventually, however, its star and sense of fun win the day.