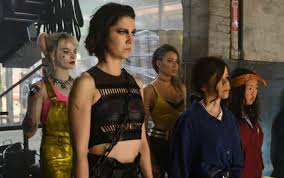 I like all types of movies but if I had to put my finger on one type that wasn’t my cup of tea, it would be ultra-violent superhero flicks. Naturally then, I didn’t go into Birds of Prey very excited.  The material covered by a lot of DC adaptations but now Birds of Prey strikes me as pretty ridiculous-a woman with a voice that can fight bad guys, a psychiatrist who comes across as a martial arts master despite not having any training. There’s no sense of logic in these characters but Birds of Prey handles that in a more interesting way than its travesty of a predecessor, Suicide Squad. It tells a simple story in a manic, hyper-stylized manner. Harley (Robbie) has been kicked to the curb by the Joker and no longer has any protection from the low-lives she’s hurt in years past. Rosie Perez plays a jaded cop, Renee Montoya. Smollett-Bell plays lounge singer-turned-vigilante, Black Canary, and Mary Elizabeth Winstead plays a mysterious assassin calling herself Huntress. The women eventually team up for separate motivations to protect a young girl, Cassandra, who made the mistake of robbing a local mob boss, Roman Sionis (McGregor). Much of Birds of Prey is underwhelming to me. McGregor’s bad guy is only intimidating with a weapon in his hand. Anybody can be scary with a gun in their hand. Thankfully, the women make more of an impression. It’s their film and they’re suitably convincing. I genuinely felt like an hour and a half flew by which is a positive on the one hand-the film was going for a madcap pace and style and succeeds-but is also the reason the overall experience feels fairly insubstantial.