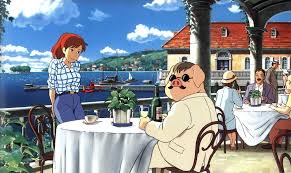 Its premise may be slightly reminiscent of the popular French fairy tale, Beauty and the Beast, but that’s where comparison stops. Like all of Hayao Miyazaki’s films, even the adaptations, Porco Rosso is wholly original. Marco Pagot, also known as Porco Rosso, was an ace pilot for the Italian military before going rogue after the events of World War I. Now he’s a notorious bounty hunter with the long arms of fascism reaching out to claim him from one side and jealous pirates trying to kill him on the other. Along the way, he befriends a young, spirited teenage girl named Fio, who has a talent for designing planes. Miyazaki’s obvious love of flight is on full display, perhaps never rendered as spectacularly as it is here. Typical of the master’s work, this is an artistic tour de force with a strange, engaging story and a fantastic score by Joe Hisaishi.