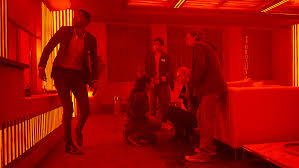 High-concept thrillers like Escape Room are practically always ridiculous but entertaining. There’s no real-world logic involved and the characters are paper-thin. The set-up is simple and immediately understood: six disparate people sign up for a brand-new escape room (a series of elaborate puzzles) with the chance to win a large sum of money, but the stakes turn out to be much higher than expected (their lives are on the line) and one of them might be behind it all. Escape room doesn’t deal with characters as much as it does with types. One person is arrogant and cut-throat. Another is intelligent but naive and so on. Their function is mainly to die spectacularly, though, so it’s not much of a complaint. Escape Room succeeds on its own terms. It’s tense, engaging, and surprising on a number of occasions. It’s only the very end that is unsatisfying as the film turns its focus from telling a complete story to setting up a franchise with multiple entries.