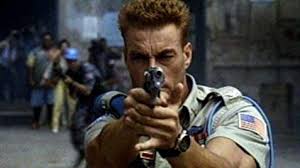 It’s difficult for me to grade films like Street Fighter. No, it’s not a good movie. Admittedly, it’s a pretty bad movie. At the same time, there wasn’t a single second I didn’t enjoy and I would happily watch it 100 times rather than sit through the critically acclaimed film, The Assassin (2015), just once more. Jean-Claude Van Damme stars as Colonel Guile; who’s army he’s Colonel of, I don’t know. Street Fighter takes place in some undefined, fantasy world at war with General Bison (Julia) threatening global-dictatorship. He enlists wayward but noble street fighters, Ryu (Mann) and Ken (Chapa), to infiltrate Bison’s operation and take it down from the inside. The action is juvenile and uninventive. The characters are one-dimensional at best. The plot is ludicrous and some of the special effects (specifically the makeup) are laughable. And yet…