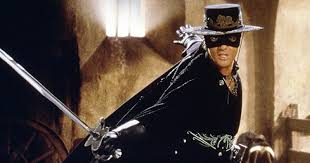 I often think that an actor making no attempt to do a realistic accent is less distracting than getting an accent wrong. I submit for evidence Anthony Hopkins in The Mask of Zorro. He’s wonderful in this movie despite not making much sense with his British accent and blue eyes. He plays Don Diego de la Vega, the original Zorro, a vigilante in corrupt California during the 1800s. After his life is torn apart and his daughter, Elena, stolen from him by Don Rafael (Wilson), twenty years pass before Don Diego gets an opportunity for revenge. Teaming up with the much younger Alejandro (Banderas), whose brother was killed by one of Rafael’s minions, the sadistic Captain Love (Lescher), the two Zorros attempt to thwart Rafael’s plans. Rousing action-adventure with a perfect balance between humor and drama, several outstanding scenes (like the sword duel between Banderas and Zeta-Jones as Elena), and an engrossing plot that borrows shrewdly from Count of Monte Cristo.