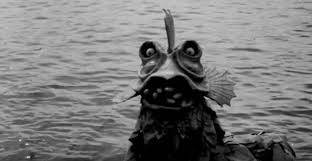 Deep down in the waters off of a Connecticut beach lives a new species of sea life. Grotesquely altered by radioactive waste, these corrupted creatures are heading for land and I’m prepared to be horrified- it is The Horror at Party Beach, after all- but then, the creatures surface, looking like an H.R Pufnstuf character. Once we see the “monsters,” the rest of the movie becomes a bad joke. To be honest, the movie was never good. From the start, the acting is wooden (in that independent-filmmaking, amateurish sort of way) and the dialogue is absurd. The characters are nondescript, all except Eulabelle, the black maid that made me roll my eyes with every line she’s given to read. The music sucks too.