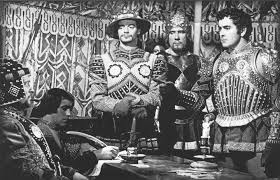 In the beginning years of the 16th century, Andrea Orsini (Power) serves the ruthless Prince Cesare Borgia (Welles). Hired to assassinate the kindly, wise Count Marc Antonio Verano (Aylmer), Orsini begins to question his allegiances just as he falls for the count’s young wife, Camilla (Hendrix). Prince of Foxes is an expertly crafted swashbuckler and star vehicle for Power, who may be the king of swashbucklers (Errol Flynn being his chief competitor for this title). Orson Welles is charismatic and riveting as Cesare Borgia. There’s no shortage of plot or intrigue either.