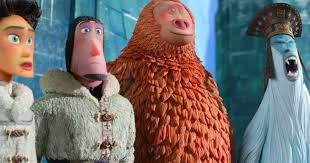 The premise isn’t terribly original. British explorer, Sir Lionel Frost (Jackman), discovers Big Foot (Galifianakis), far more amiable and eloquent than expected, and must get him back to the English “Society of Great Men” to prove it and thus receive his membership. Society leader, Lord Piggot-Dunceby (Fry), goes out of his way to make sure that doesn’t happen, including hiring a dauntless hitman, Stenk (Olyphant), while fierce beauty, Adelina (Saldana), joins Frost and Big Foot on their journey. It’s very reminiscent of Around the World in 80 Days. The humor is pretty dry as well. Missing Link overcomes its shortcomings with typically impressive animation by Laika Studios and a couple of excellent scenes. Particularly, the climax where the trio of protagonists attempts to escape Stenk on a collapsing bridge.