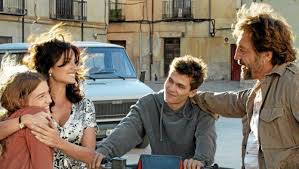 There’s a series of mystery novels-for my money, the best series in all of literature-written by Ross MacDonald and featuring his ace detective, Lew Archer. I think about a certain quote from time to time, written, not in one of those books, but about the series as a whole. I’ve tried for a while now to find out exactly who said it to no avail, but it goes something like this, “Most mystery writers write about crime. MacDonald writes about sin.” With the amount of time I’ve spent reading, rereading, or thinking about Lew Archer’s cases, I come back to this quote often. It’s perfect. It’s exactly and succinctly the distinguishing characteristic of MacDonald’s writing and what I love most about his novels. I was reminded of this quote again while watching Asghar Farhadi’s most recent drama, Everybody Knows. Farhadi, an Iranian director, has made a number of great films in his own country (A Separation, The Salesman, Fireworks Wednesday) and abroad (The Past). He’s won the Oscar for Best Foreign Language Film twice. Only the likes of Ingmar Bergman, Vittorio De Sica, and Frederico Fellini have won that award more times. I have no idea if Farhadi has ever read a Lew Archer novel, but he works in a similar vein. He takes the holistic view of each mystery he untangles. Every character has secrets. Every character’s actions affect someone else in the story significantly. Every character has motives. Motives for Farhadi, and for me, are more interesting than the crime itself. None of his films that I’ve seen have that kind of Agatha Christie summation at the end that’s tremendously satisfying but also simplistic. It’s a release of tension and when you know everything, when you understand completely, you don’t have to spend any more time thinking about what happened. Farhadi never gives you that satisfaction. He never releases the tension.

His most recent film, Everybody Knows, takes place in Spain; a small town, apparently near Madrid. Cruz stars as Laura, returning home from her life in Argentina to attend her younger sister’s wedding. Laura has two children, a girl named Irene and a younger boy named Antonio, and an Argentinian husband, Alejandro (Darin), that most people in her hometown imagine to be a big-shot, stemming from the devout Alejandro’s generous donations to a local church. Bardem stars as Paco. He’s never left their hometown and from the beginning of the movie, we get the sense that he’s pretty popular. Paco’s married to Bea but they have no kids together. Laura and Paco used to be together and they’re both so attractive, you can imagine how admired they’d be as a couple in such a small town. Everything, every relationship, every past mistake, becomes important later on when Laura’s daughter is kidnapped and held for ransom. Everyone becomes a suspect. The kidnappers send their demands to Paco, as well as Laura (who would seem to be the natural target) and the characters, like us in the audience, wonder why would they do that? The things the friends and family members say to each other while they’re wondering form the real basis for the film. What’s interesting about Everybody Knows and, again, Farhadi’s films in general, are the minor twists. This is a very small town he’s using here and everyone knows each other. A lot of what’s revealed is already known by most of the characters. It’s us in the audience who are in the dark; who are learning as the film unwinds. The reveals, the would-be bombshells, the secrets aren’t very secret. The character’s responses suggest that it’s more about hearing it said out loud than it is what was said. The performances, from the supporting cast to the stars, are unaffected and observant. I admired little moments like when Paco has just learned something momentous. The next five to ten seconds or so are devoted entirely to this character thinking; no one speaking. I also appreciate Farhadi’s most common motif throughout his films of kids as witnesses; kids on the periphery of the main plot but still affected by the drama. That Farhadi can not only successfully tell an engaging story in another language, using a separate culture, but for him to make this film, Everybody Knows, fit so comfortably with the rest of work is an impressive testament to his skill. Whether working in his native language, Persian-A Separation, About Elly, etc.-or French-The Past-or now, Spanish, he’s an auteur. His vision transcends and shines through. Everybody Knows is yet another occasion.