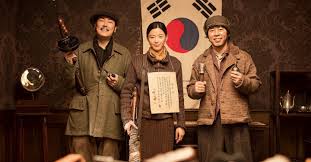 It’s 1933 and Koreans live under the oppressive rule of neighboring Japan. Kang In-guk, a Korean businessman and an ally to Japan, becomes the target for the resistance, along with Japanese general Kawaguchi Mamoru. Three wild card resistance members are picked for the assassination-Big Gun, Duk-sam, and Ahn Okyun (Ji-hyun)-and hired by Captain Yem (Jung-jae), a double agent secretly helping Japan. Ha Jung-woo plays a rogue assassin named Hawaii Pistol who eventually joins Ahn Okyun in her mission as the two imagine life together in easier times. There’s a lot of plot in this film, a lot of interesting turns and suspense. It’s not, however, the somber, earnest type of movie that I imagine when I hear the term “period film;” the prestige pictures that win awards but are usually pretty boring. Assassination uses its historical background as a springboard for an outstanding action flick with romance and intrigue and a group of villains that could give Indiana Jones’ nazis a run for their money.